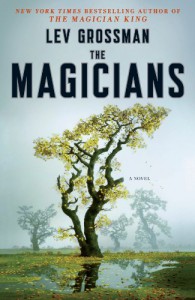 Quentin Coldwater is brilliant but miserable. A senior in high school, he's still secretly preoccupied with a series of fantasy novels he read as a child, set in a magical land called Fillory. Imagine his surprise when he finds himself unexpectedly admitted to a very secret, very exclusive college of magic in upstate New York, where he receives a thorough and rigorous education in the craft of modern sorcery.

He also discovers all the other things people learn in college: friendship, love, sex, booze, and boredom. Something is missing, though. Magic doesn't bring Quentin the happiness and adventure he dreamed it would. After graduation he and his friends make a stunning discovery: Fillory is real. But the land of Quentin's fantasies turns out to be much darker and more dangerous than he could have imagined. His childhood dream becomes a nightmare with a shocking truth at its heart.

At once psychologically piercing and magnificently absorbing, The Magicians boldly moves into uncharted literary territory, imagining magic as practiced by real people, with their capricious desires and volatile emotions. Lev Grossman creates an utterly original world in which good and evil aren't black and white, love and sex aren't simple or innocent, and power comes at a terrible price. [ synopsis from goodreads ]

*drops head onto desk, almost sobbing* I'M DONE. FINALLY. IT FELT LIKE THIS BOOK WOULD NEVER END. If I didn't have a stupid need to finish every single book I start, I probably wouldn't have finished this one. I would've given up halfway. There were times when I almost did. There were times when I thought "why do I need to finish books again???" and then I would remember the others that I'd hated but still pushed through. And I'd try to finish this one again. But it was rough, let me tell you. It feels like it took me a year to read, rather than a couple of days.

So I started this one because I heard it was going to be a show. (Ha. Hahaha. Move that one to the top of shows I will never, ever watch.) And honestly it took me forever to get a hold of this book??? I had it on hold at the library for like two months (which now I'm going "WHY IS THIS BOOK SO POPULAR?????")

Well, anyway, I read some things about it being a lot like Harry Potter? Which sounded promising? (LET ME TELL YOU. IT'S NOTHING LIKE HARRY POTTER.) It honestly reminded me more of Chronicles of Narnia. But even that is giving it faaaaaar too much credit.

Honestly, this book had a couple of good ideas (or popular ideas, honestly) but it didn't really stick with any of them. Reading this book was like popping in a movie you've never watched and fast-forwarding only to stop every once in a while and watch one scene then fast forward again. It picks up bits and pieces of what should be a story but leaves them in the rearview mirror long before it's done anything with them.

If this book could've decided just what story it wanted to tell, it might have been good. At first it was about a school. But the entire five years (with was condensed to four for our lead) worth of magical education was squashed into barely half the book. Then it was about a magical land that everyone wanted to find but few had done so. And when they do find it, it's barely even explored and hardly worth mentioning??? If either of those concepts would've been explored throughout the whole book, this might have been worth my time. But instead this book was a mess. And not even a pleasant mess.

But I think the worst offender was the main character. His life was in constant turmoil because nothing made him happy. He was unsatisfied with his life and this discovered he's a wizard. He thinks it will make him happy. It doesn't. Then he discovers the magical land about which he's dreamed. He thinks it will make him happy. It doesn't. You know, happiness doesn't come from outside forces. At some point, it has to start with being okay with yourself and being open to finding happiness. And he just never got that and it was the most frustrating thing I have ever read in my life. Which made me hate this book all the more.

Within the last year, I have given exactly one book a single star. I very, very rarely give a book only one star. I can usually find SOMETHING to grab onto and enjoy and make me like a book. BUT THIS BOOK HAD ABSOLUTELY NOTHING GOOD ABOUT IT. So if nothing else shows just how much I hated this book, it should be that.

All I can say is I'm so, so glad to be done with this book. I may even start a parade. It's like a weight has been lifted. So while I very rarely tell people not to read a book, this is one of my only exceptions. If you want something that is truly magical and an enjoyable read, stick to Harry Potter. REAL Harry Potter. Don't go looking for something like it because, as this one obviously shows, there's nothing better than the real thing.