Renée Ahdieh's The Rose and the Dagger 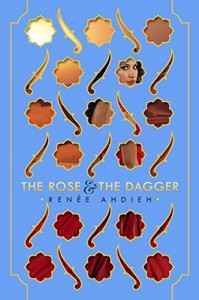 The much anticipated sequel to the breathtaking The Wrath and the Dawn, lauded by Publishers Weekly as "a potent page-turner of intrigue and romance."

I am surrounded on all sides by a desert. A guest, in a prison of sand and sun. My family is here. And I do not know whom I can trust.

In a land on the brink of war, Shahrzad has been torn from the love of her husband Khalid, the Caliph of Khorasan. She once believed him a monster, but his secrets revealed a man tormented by guilt and a powerful curse—one that might keep them apart forever. Reunited with her family, who have taken refuge with enemies of Khalid, and Tariq, her childhood sweetheart, she should be happy. But Tariq now commands forces set on destroying Khalid's empire. Shahrzad is almost a prisoner caught between loyalties to people she loves. But she refuses to be a pawn and devises a plan.

While her father, Jahandar, continues to play with magical forces he doesn't yet understand, Shahrzad tries to uncover powers that may lie dormant within her. With the help of a tattered old carpet and a tempestuous but sage young man, Shahrzad will attempt to break the curse and reunite with her one true love. [ synopsis from goodreads ]

I can't even put into words how much I love this book. And this whole series. On the one hand, I'm glad that it was a short ride but, on the other, I want more. And I'm seriously so, so glad Jenn told me about this series. (We were actually reading this one together until her, uh, laptop melted *shifty eyes* Then I kind of finished it before her. #friendoftheyear)

Well, anyway, I loved the first one because I love the relationship between Shazi and Khalid. While that relationship takes more of a backseat in the first half of this book, I loved getting to know other characters. Especially Irsa. She is a wonderful young woman and I'm glad we had a chance to see more of her in this book and really get to know her. (ALSO ARTAN. Is he my new favorite because I think he is.)

I just really loved how this whole book panned out. With trying to break the curse and the battles and everything. I can't even express how much I just enjoyed every bit of this book. I have come to love these characters so dearly and I have enjoyed this ride so much and I will mostly definitely be back to revisit this journey sometime in the future.

And the writing was, as always, so beautiful. I wrote down so many quotes. Also so many hilarious quotes. Jenn and I were sending our favorites to each other while we read. So, honestly, reading this with Jenn and discussing while we went was probably one of the best ways to read this (though it honestly dissolved into both of us shouting about how much we love everything, haha). And this is definitely a book I will always have good memories of because of that. And because it's just a good book.

So if you're looking for a shorter series with some really lovely characters and some beautiful writing, I highly recommend this one!! It's definitely one I'll be rereading again and again.